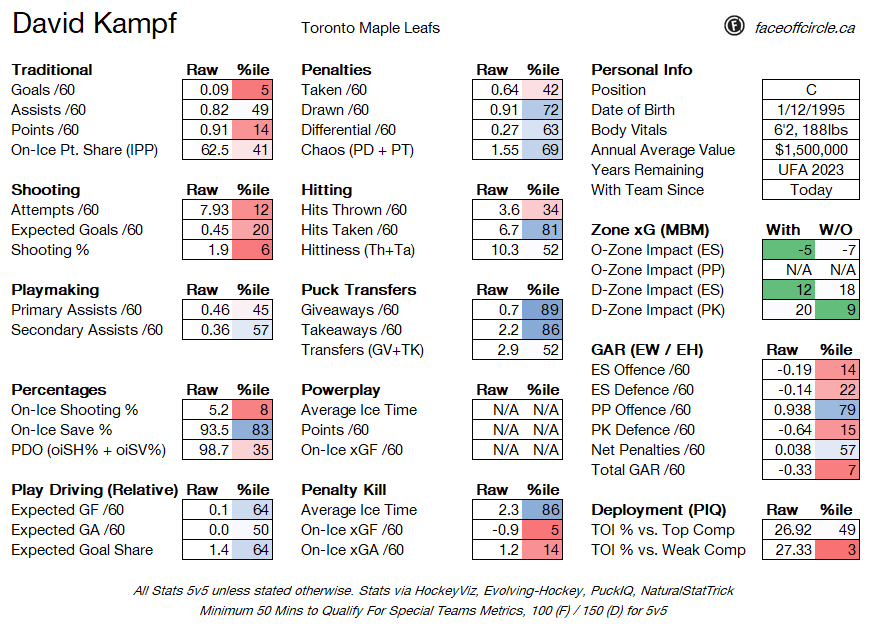 Kampf is the big fish out of this group, by far the most likely of the bunch to regularly play in the NHL, as proven by his two-year contract at a $1.5 million AAV, slightly higher than the buriable threshold. In his media availability, GM Kyle Dubas described him as a player that the team has been interested in acquiring for some time, and while I wouldn’t be of the same mindset, I can see where he’s coming from to an extent.

A good way to describe Kampf is as a bottom six “escape artist”. Deployed twice as often in the defensive zone than in the offensive zone and used more against Chicago’s top competition than any other centre, Kampf rarely saw a weak or easy matchup and was tasked with keeping the play afloat for them. While he wasn’t individually productive, producing just 12 points in 56 games, he managed to put up positive team-relative possession numbers and neared the 50% mark on despite his deployment and Chicago’s lack of support talent.

My concern, as always, is that he doesn’t do a heck of a lot from a creativity standpoint. But maybe some of his individual and line-based shooting percentage events it self out, and maybe he’s a player you can specialize the role for. Winning draws and surviving legitimate minutes is not without its use, and while I’d personally rather double, triple, quadruple down on offence, but I can see the utilitarian purpose here. It’s not a bad move, I just can’t convince myself it’s fully good. All the same, I’m interested in seeing what role they have for him.