It looks like Auston Matthews might finally have to figure out who Scott Sabourin is. After all, there’s a very real chance that they’ll be teammates at some point this season now, beyond the short interaction in training camp. The Maple Leafs signed the forward to a 1-year contract this afternoon, carrying an NHL cap hit of $700,000 and AHL salary of $250,000, according to Sportsnet’s Chris Johnston.

The first glimpse of this signing happening came from TVA’s Renauld Lavoie, when he reported that Sabourin had been placed on waivers:

As Sabourin’s last play had been on an NHL contract, the waiving upon signing wasn’t absolutely necessary, but the fact that it happened means we can safely assume that they’re not rushing to get him into the lineup. Which makes sense, given that he was originally signed to an American Hockey League contract by the Toronto Marlies in October. In other words, he’s already been in the organization for three and a half months, and is simply converting from an AHL to NHL deal.

Normally, this would be pretty atypical, especially when you look at his career. The Orleans, Ontario native is 28 years old and has only played 35 games at the NHL level, and only averaged 7:01 of ice time per game within those – all with the Ottawa Senators last season. In those games, he picked up just six points and had extremely poor underlying possession numbers. His only real impacts come in terms of his physicality, within which he averaged about two hits a game last year and had one fight. 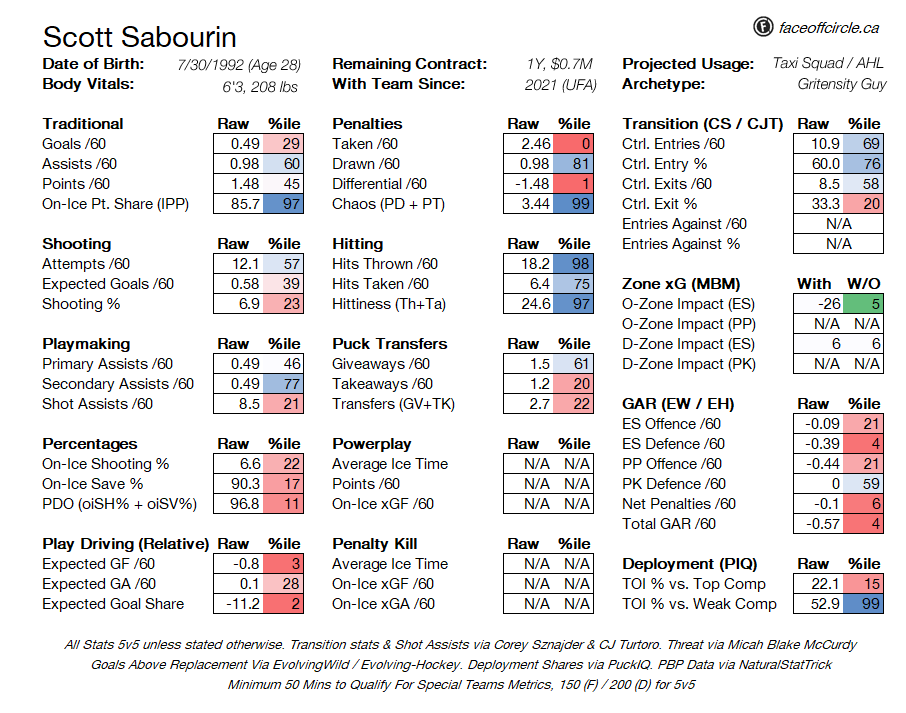 The easy, on-the-surface way to look at this signing is that it’s an immediate response to the loss of Wayne Simmonds, who is expected to miss six weeks with a hand injury after blocking a clearing attempt in last night’s 5-1 win over Vancouver. After all, Simmonds’ role was to be the physical guy in the lineup, and that’s Sabourin’s best quality. One for one match, right?

Well, not really. Simmonds, while not great on the side of possession, is definitely not cusping the bottom of the league. He’s better at making puck decisions, he’s a more potent finisher, and he can play on the powerplay. However, in a season where lots of mini-series are played against teams, it’s not the worst idea to at least have someone on the roster that can make opponents feel like they’re not without a presence that can be activated in the next game if something brews. At the minimum, that will be the reasoning given at the NHL level.

There is a second layer to this, though, at least from my vantage point. With Simmonds, Joe Thornton, and Nick Robertson all on the injured reserve, and Pierre Engvall, Alexander Barabanov, and Adam Brooks all on the taxi squad, this whole situation leaves the Marlies in a real tough spot for forwards, whenever their season picks up. As far as NHL contracts go, the team currently only have Joey Anderson, Kenny Agostino, and should he come back to the team from his loan to Germany, Kalle Kossila available to their AHL club. They do have a handful of players signed on AHL contracts, including established players like Tyler Gaudet and Rich Clune, but suffice to say, the pool is very, very thin at the moment.

That’s a problem, especially in a season with as many existing restrictions as COVID-19 has provided us. Not only is the team now in a spot where they’re likely going to be looking for local talent without NHL contracts, but they’re also in a spot where they can’t afford to lose anyone to another team. Signing him to this deal prevents another team from picking him off with a similar NHL contract offer – say, closer-to-home Montreal, or the already-familiar Senators. Another option along the same lines would be to keep Sabourin on the fringes of the taxi squad, and take a player like Adam Brooks, Pierre Engvall, or a re-activated Robertson back down to the Marlies to inject them with some skill.

Since this is a one year deal, his contract’s impact on the limit of 50 probably doesn’t carry much significance, and since the team is already over 20% into the season and has five contract spots left to go, with player movement expected to be at a minimum, it’s unlikely to matter.

Basically, this is the type of signing that I would say “why?” to in a less-unprecedented year, but the current circumstances facilitate it. It gives them a worst-case-scenario option if a season series gets out of hand before Simmonds comes back, or more likely, gives them some flexibility to actually have forwards playing on the Marlies when their season eventually starts, without worrying about a nearby team picking him off with a deal of their own. It’s entirely possible he doesn’t see an NHL game over the course of this contract, but just having more options in a season where there aren’t many makes this worthwhile for the organization.

The Maple Leafs had a Comfort Food Trade Deadline